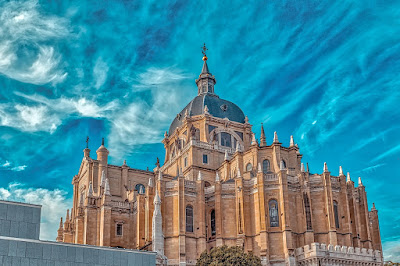 The need to go on pilgrimages has always been a human characteristic. People have long trodden paths to destinations that promised miracles or penance, or to atone for sins. And even in this rational age, people are drawn on spiritual quests to the sacred sites of the world. In the Christian world, few sacred sites are more famous that Santiago de Compostela in Galacia, northern Spain. Pilgrims have walked this route for more than 1000 years. And nowadays, over 100000 pilgrims annually make the journey that ends at the cathedral in Santiago de Compostela. What draws them there?

One of the oldest extant pilgrim routes is the Camino de Santiago de Compostela, or The Way of St James in English. This way is in fact made up of a collection of old pilgrimage routes which lead to Santiago de Compostela in Galacia in north west Spain. Here a cathedral has stood since the 9th century.

According to legend, the appearance of the remains of the Apostle Saint James led to the construction of Santiago de Compostela in the ninth century. It soon became a pilgrimage destination on a par with Jerusalem and Rome.

Of all the many paths that lead to Santiago de Compostela, the most popular is known as the French Way. This is a 750 kilometer route that begins in France and crosses the Pyrenées at either Somport or Roncesvalles.

Modern pilgrims make this journey for a number of reasons, only some of which are spiritual. In fact over 100,000 pilgrims from over a 100 countries make the journey each year on foot, bicycle, donkey, or horseback. And that's just official pilgrims holding a pilgrim's 'passport'. Most conclude however that it is a moving experience and rewarding in ways they did not anticipate

So for whatever reason you may wish to travel this trail, you can do so on foot or bicycle. Here are some pointers for the journey.

Firstly, you should get a Pilgrim's "credencial" by registering in a town such as Roncesvalles on the border with France. This document identifies you as a bona fide pilgrim and permits you to stay in the small inns known as refugios or albergues in Spain. These hostels dot the routes along the pilgrim's ways and often cheap or even free accommodation. This usually takes the form of dormitory beds and accommodation is generally limited to one night.

The credencial is also necessary for getting your Compostela, the certificate awarded to pilgrims on completing the way. To earn this you need to walk a minimum of 100 kilometers or cycle least 200 kilometers on your pilgrimage. To get your compostela, you need to have you credencial stamped in the towns you pass though on your pilgrimage. This proves you've walked the route recognized by the Pilgrim Association of St James.

Many take the pilgrimage for secular reasons. It's a scenic route wending its way through vineyards, farms, orchards of apples and pears, herbs and vegetable gardens and a varying landscape marked with with villas and quaint villages set high in the mountains.

Whatever the reason for the pilgrimage, finally arriving at the great Cathedral of Santiago de Compostela is a moving experience. True pilgrims embrace the statue of the Saint James and often break down in tears of happiness. And even those who traveled for pleasure find themselves affected in ways they can't explain.

So if you're considering a pilgrimage to Santiago de Compostelo, don't hesitate. Whatever your motives, you'll have a wonderful experience and who knows, it could change your life.